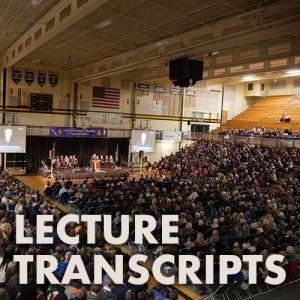 George C. Marshall, future five-star General of the Army and Army Chief of Staff, was a Vancouver resident from 1936-38 when he commanded Vancouver Barracks and supervised the Northwest’s Civilian Conservation Corps camps. He heads the list of Vancouver’s most distinguished 20th century residents.

The Marshall Lecture is the cornerstone event of Celebrate Freedom, a program of the Fort Vancouver National Trust, in partnership with the City of Vancouver. The Marshall Lecture honors the character and principles of General George C. Marshall, who served at Vancouver Barracks as Commander of the 5th Infantry Brigade from 1936 to 1938. During his tenure as Commander, General Marshall hosted the ANT-25 flyers upon their arrival at the Army Air Corps field. The George C. Marshall Lectures focus on three phases of Marshall’s career: his time in Vancouver, his achievements as a military leader, and the impact of his work as Secretary of State. In 1953, Marshall received the Nobel Peace Prize, the only professional soldier ever so honored. The award recognized the Marshall Plan, which provided an alternative to totalitarianism, and gave Europe’s countries the economic strength by which they might choose freedom.